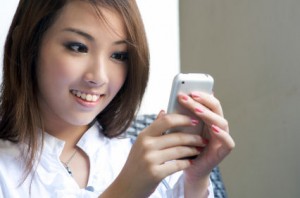 Everyone has heard a horror story about someone breaking up with their girlfriend or boyfriend by text message.

What we often don’t consider though is just how much damage those unassuming little strings of letters and smileys might have done in those relationships up to that point, and what they could be doing in ours.

According to recent research, teenagers will primarily choose text messaging over any other form of communication, including talking face to face.

Adults might not be quite at that stage, but many are probably not far off it. Text messaging is a booming phenomenon, with subscriptions catering to this low cost, no fuss form of communication spurring on the trend. Unfortunately, it is not a panacea for our relational needs.

There is only so much that can be communicated by a text message. The medium is designed for brevity, hence the ‘text speak’ language that has developed out of it. Abbreviation is key, with minimal content and instant transmission the big attractions.

What this means is that the information is succinct, but often not well thought out. This would be fine if it was used to communicate that one was facing a delay, or to make a request for some extra groceries to be picked up on the way home.

However, when these short, sharp messages are used to hold discussions about important relational matters, a lot is lost in transmission. Written words are easily misinterpreted, especially if they have been pared down by the text process.

What may have been written in jest might not translate that way on the receiver’s phone, and if messages cross in transmission there is potential for a pro-active message to be read as a reactive response.

What is more, the perceived delay between sending a message and receiving a reply is easy to misconstrue as communicating something that might not be intended.

What this comes down to is choosing the right medium for the message. If there is something brief and succinct that needs communicating, then text it. ‘Pick up milk’ or ‘Running 5 min. late’ are the epitome of what text messages do well.

However, if there is something more sensitive, something that needs to be communicated with the right tone or meaning, then it is worth the few cents extra to make the call and be certain that the message gets through the right way.

In fact, if a relationship is hanging in the balance, it might even be worth the sacrifice to say it face to face. While text messages have their place, relationships live and die by communication, and texting just isn’t strong enough to carry that load.

https://blog.datingwise.com/1671/texting-in-relationships/2012-07-18T22:05:27+01:00taraDating EssentialsMobile,Rejection,TextingEveryone has heard a horror story about someone breaking up with their girlfriend or boyfriend by text message. What we often don't consider though is just how much damage those unassuming little strings of letters and smileys might have done in those relationships up to that point, and...taraTara Milleradmin@datingwise.comAdministratorDating and Relationship Advice