How NOT to approach women 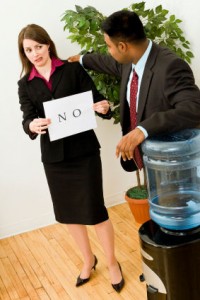 Going up to women in a bar or club is extremely nerve racking. Success in picking-up females in these environments can be tough. If you haven’t been too successful lately, review the following Do’s & Don’ts to make sure you aren’t messing up on some of the basics.

Don’t give ’em the same old cheesy pick up lines.
One of the most crucial aspects of the approach is knowing what to say to grab a woman’s attention. Unfortunately, a lot of guys still try extremely bad lines and get immediate rejections. Take a look at some of these in the world’s worst pickup lines, with complete success statistics for each. If you’re guilty of such atrocities, then you might need to rethink your approach.

Instead, experiment by asking women different kinds of questions. You can try with questions about the surrounding environment for example, “is she enjoying the music'” or something subtly personal such as “Is she from that particular city'”

Practice all different kinds of openers to see which you are most comfortable with. And to find out which are yielding the best results.

But importantly, find an approach where you don’t come across as fake. Women hate getting insincere-sounding pick-up lines. If you don’t seem at least half-way genuine when you deliver your opening line, then you probably won’t get far.

Don’t go too fast.
Asking a woman for her number after talking with her for just five minutes is a huge minus. Often this can be due to nerves and can make you a non-starter in many women’s eyes. You need to exude calm, and confidence to seduce a woman. Be spontaneous and don’t take every encounter too seriously or personally. Just remember that it really isn’t a big deal if she is not interested.

Try to cultivate a good conversation. That way, when it’s time to go, you’ve got a better chance at getting her phone number and a date. Try to really be interested in the conversation you’re having with her. Women pick up on insincerity very quickly. So find something to talk about that is actually interesting to both of you, and the entire interaction will seem less awkward.

Don’t stick around when it’s clear she wants you to go.
Some guys think that if they just keep hanging around and trying, their persistence will eventually pay off. But if a woman is clearly not interested in you, then it’s likely you’re just making a fool out of yourself. And besides, there are plenty of others, so no need to keep trying where you’re not wanted.

Don’t be rude if she rejects you.
Keep in mind that the woman you’re trying to pick-up didn’t solicit you. So, if she brushes you off, don’t take it personally. She might just want to relax in peace.

You have to remember that attractive women are getting hit on all the time. Sometimes they just want to enjoy themselves without being harassed by men all night.

Hopefully, if she’s not interested, she’ll at least turn you down politely. But ask yourself how you get rid of unsolicited salespeople, telemarketers, etc. It’s not always nicely. There’s nothing uglier than an arrogant guy pestering a woman who wants to be left alone – and who then behaves rudely to her when she tries to get him to leave!

It may sound obvious, but don’t forget good hygiene.
If you’ve been out eating and have had a few drinks you may not realize the state your breath is in. Nothing will turn a woman off faster than bad beer breath. So be sure you chew some mints or gum before you go in for the kill. A recent relationship survey found that this is the number one turnoff for women – by a long way.

Do go out with women friends too.
This is very important. Being seen out with other women can be very helpful. There’s something about having other females around that makes you seem non-threatening. It also turns you into an item to be competed for. If a woman sees that other women are interested in you.

If you’ve never tried going out with women friends, definitely give it a shot. And take notice of how the other women in the bar or club react to you.

Be sure to give the one you’re interested in a little eye-contact. Don’t go overboard staring so hard that you make her uncomfortable. But if your eyes cross paths with hers a few times, then you definitely send the signal that you’d like to talk with her. And who knows, she might even come up to you.

Whenever you’re trying to approach women, just remember that – to some degree for men – it’s also a numbers game, a kind of love lotto. The more you try with, the greater your chances for success. And if you aren’t having luck with one of them, don’t worry, there are plenty of others out there!

https://blog.datingwise.com/1663/how-not-to-approach-women/2012-07-18T18:21:22+01:00taraTips and IdeasApproaching Women,Chat Up Lines,Conversation TopicsGoing up to women in a bar or club is extremely nerve racking. Success in picking-up females in these environments can be tough. If you haven't been too successful lately, review the following Do's & Don'ts to make sure you aren't messing up on some of the basics. ...taraTara Milleradmin@datingwise.comAdministratorDating and Relationship Advice