When To Give-Up On A Relationship 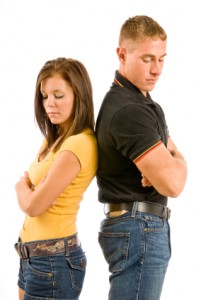 Sometimes it’s hard to know when to get out of the relationship you’re in. People grow apart for many reasons. They discover they want different things out of life. Attraction to one another dies. Interests change. And so on.

But closing your eyes to the fact that you and your partner just don’t work anymore can also land you in serious trouble.

Breaking up is hard to do!
Take for example a young twenty-something couple from San Francisco, Sean and Kathy. They met while at college and moved to the city just after graduation. While at school they both studied business and were interested in entering corporate jobs in finance. Both of them landed high-powered jobs in the field and began their new careers with the idea that marriage would come in a couple of years.

However, after about a year at the job, Sean decided that working in finance wasn’t for him. Instead he wanted to pursue a long-time dream of becoming a writer. Kathy supported and encouraged him in the beginning. But after many months it became clear that the two of them were moving in different directions with their lives.

As Sean became more withdrawn and disillusioned with city life, Kathy got more involved in it. She was successful, a networker and moving up in her career. Sean was, on the other hand, struggling with writing and wanted to move elsewhere.

Slowly they began to argue. First about little things then about big ones.

Both had doubts about continuing the relationship. But because they’d been together for so long, they just remained as they were. Sean grew increasingly negative and abusive with regards to Kathy’s job and work friends. While at the same time, Kathy started getting aggressive attention from one of her colleagues.

This new attention, combined with an unhappy home life, slowly pushed Kathy toward her colleague. And it wasn’t long before she began having an affair. Things between Kathy and Sean ended badly. He was verbally abusing her and she was cheating on him. Despite many good years together, they were ultimately no longer able to even be friends.

Knowing when it’s time to break it off
All of the pain Sean and Kathy inflicted on each other could have been avoided if they had just been able to recognize when it was time to quit the relationship. They both sensed that they were growing apart, but neither had the courage to address it. Each just thought things would somehow work themselves out.

To help you avoid traveling down a similar path, here are a couple of things you can do to think about whether or not it’s time to break-up:

It might just be a temporary phase that you can work through if things haven’t been going well for a few weeks only, if you or your partner has recently changed directions in life (you should give it a little time), or you still love your partner and don’t want to live without them.

You might want to end it if things haven’t been going well for months! You or your partner may have changed directions in life sometime ago and things just haven’t been the same since. Or perhaps the idea of living without your partner doesn’t really bother you that much anymore.

No matter which of these two situations you find yourself in just remember, relationships are a lot of work, and require compromise and cooperation. You have to be prepared to struggle through the hard times too and not simply give up. But it’s also a delicate balance. You can’t let things go on longer than they should either.

http://blog.datingwise.com/1673/when-to-give-up/2012-12-28T16:25:44+00:00taraBreaking UpBreaking Up,Divorce,Give UpSometimes it's hard to know when to get out of the relationship you're in. People grow apart for many reasons. They discover they want different things out of life. Attraction to one another dies. Interests change. And so on. The longer you're together, the harder it is to quit Generally...taraTara Milleradmin@datingwise.comAdministratorDating and Relationship Advice

Breaking Up, Divorce, Give Up